Why You Should Run the Base Camp Brewing Co. 5K on Oct 8! 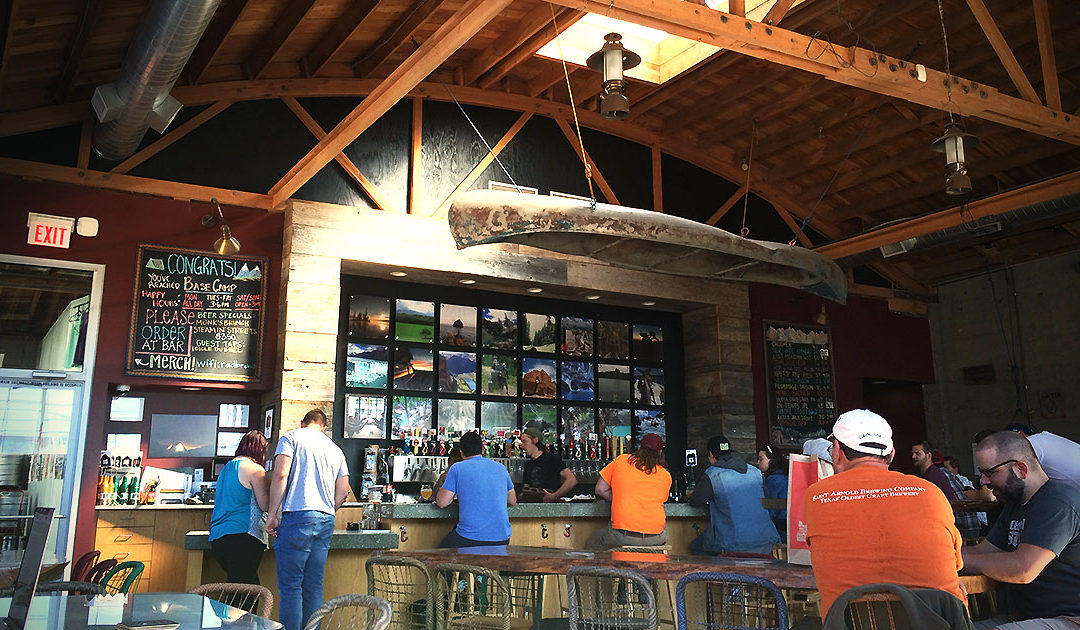 The fall is one of my favorite seasons to run. The changing leaves, cooler weather, and crisper air feels incredibly refreshing. Waking up to a brisk 50 degree morning is both a sign of the turning season, and an indication that it’s time to dig out the fall running gear.

We’re incredibly excited to be partnering with Base Camp Brewing Co. in the Buckman neighborhood of Southeast Portland for our first ever Oregon Brewery Series beer run. I have fond memories of backpacking and camping in the fall, so it seems extra fitting that this brewery location will be kicking off the Oregon Brewery Running Series.

About Base Camp Brewing

Brewing since 2012, Base Camp is located at 930 SE Oak St, on Portland’s inner eastside. Walking into the brewery feels like what you might expect at an actual base camp. A large outdoor “patio” greets you with gravel underfoot, fire pits, and rustic handmade benches, perfect for large groups. This is exactly the kind of environment to hang out after a long day or a long run. 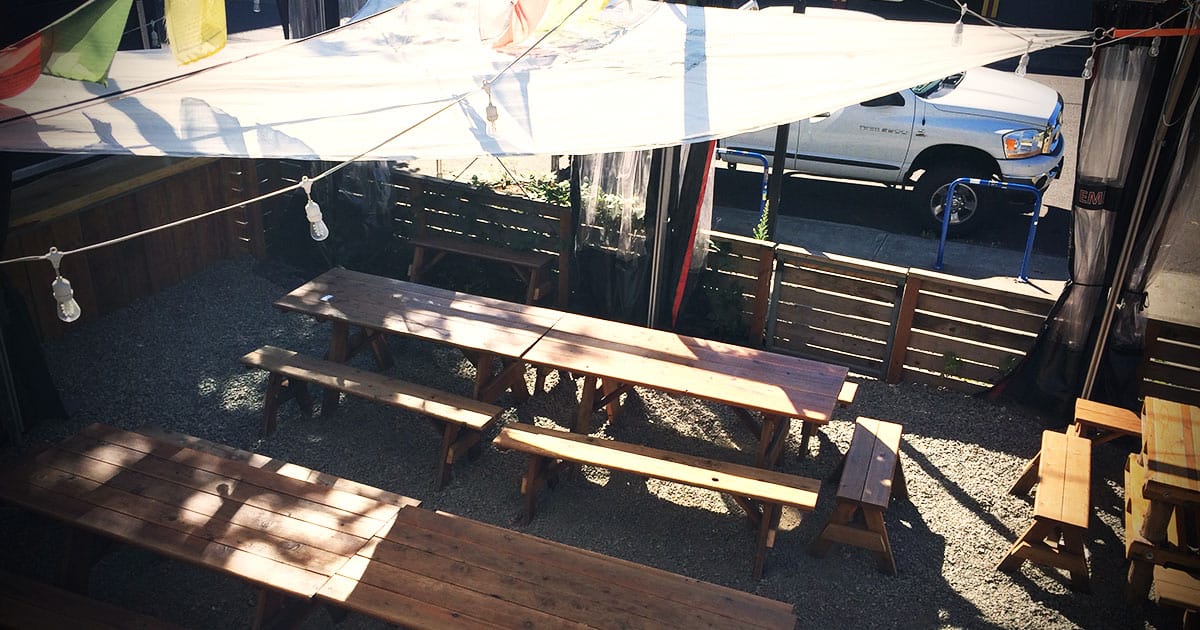 Walking up a flight of stairs into the taproom, you’ll feel like you’ve entered a cabin, with open rafters, log tables, and chairs made from nylon webbing. Nearly everything in the tap room was handmade by Base Camp staff. Even the canoe hanging from the rafters is a result of a disastrous trip down the MacKenzie River, when the co-founders got stuck in a log jam and had to come back for it later.

Base Camp has “a lot of runners on staff” says Amanda Sparks, Events Coordinator at Base Camp. “The crew has participated in Hood to Coast and we’ve also participated in several half and full marathons.” We suspect this played a hand into why they were interested in participating with us!

About Base Camp Beer

Base Camp has 12 beers on tap at the brewery, which rotate some with the changing seasons. You can also find their 12 oz cans and 22 oz aluminum bottles most places beer is sold. 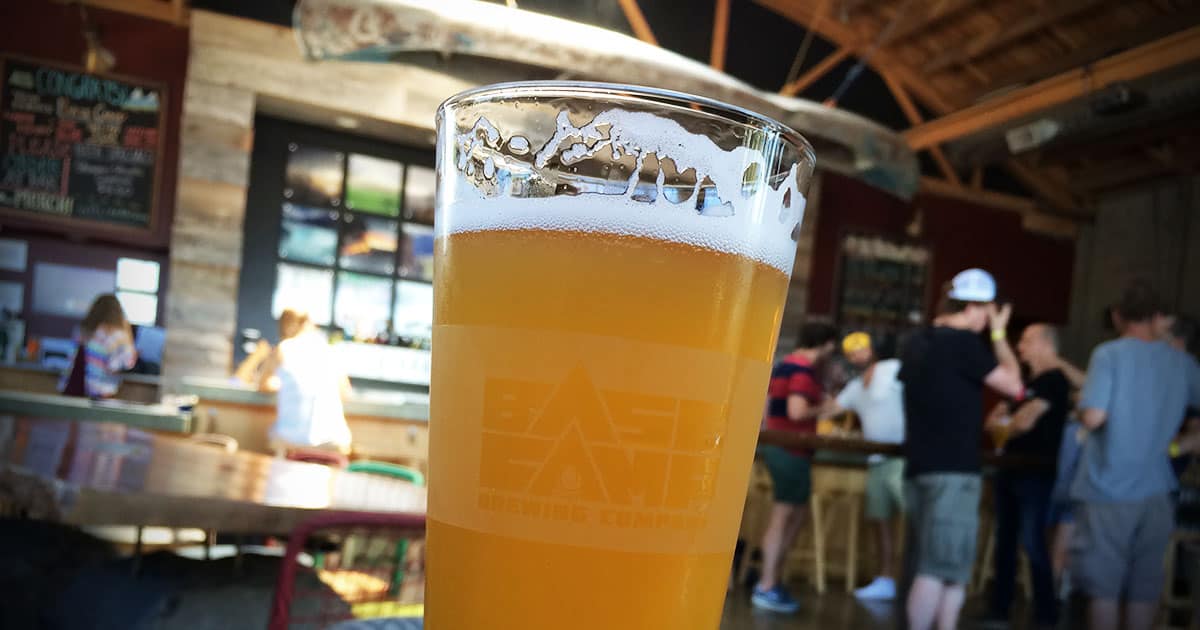 Two of our personal favorites are the S’more Stout, and In-Tents India Pale Lager.

The S’more Stout tastes like a chocolatey gooey mess roasted over an open fire on a stick. “Aromas of chocolate, coffee, fig, and smoke invite you into a gigantic maltiness that is distinct in its smooth and refined character, with flavors of chocolate and hints of smoke mingling with rich caramel, fruit, and warming alcohol.”

The In-Tents India Pale Lager is one of their flagship beers, with a smooth taste and great pairing ability (we’ve tried it with pizza and grilled chicken, and both were fantastic!). “Dry-hopped and aged on an in-house toasted blend of white and red oaks.”

According to Sparks, two beers exclusive to their tap room in in October are:

“The victor of the Duane Graf Annual Homebrew Competition, Bizzy, has earned the opportunity to step up her Dunkel Wiessbier to the professional level, and we’ll be brewing this delightfully rich, complex, and highly quaffable brew on Friday, 8/5 for release around the third week of August. Notes of complex malt meld with banana esters and clove phenolics to produce a delightfully balanced brew to enjoy as the days shorten into fall.”

We want to emphasize that our runs aren’t traditional “races”. You will not be timed (at least not by us), you’ll be running on an open course, and there are no medals at the finish. The runs will, however, be super fun!

The Base Camp Brewing Co. 5K will start on the north side of the brewery. From there, run up SE 10th Ave, hang a right on Sandy Blvd for a block until Ankeny St. We will be running on Ankeny St. all the way up to Laurelhurst Park (a little over a mile). Once there, we will turn south near the restrooms, then sharply right to head west on Pine St back to Base Camp Brewing.

Ankeny is a Neighborhood Greenway, meaning bikes and pedestrians are prioritized. There will be two spots (SE 20th and SE 28th St) where we’ll have to be especially cautious of cars, but otherwise we shouldn’t need to worry about cross traffic.  The majestic trees, lake, and huge grassy dog play area of Laurelhurst Park will be a nice contrast to the roads.There are also a couple of decent hills along Ankeny, but nothing too bad. The second half of the course will feel a lot easier!

Since this is our first event, we are looking forward to seeing how everything comes together. We are still working on live music, and some other fun perks for the event.

The 5K run starts at 11:00 a.m., but please arrive by 10:30 a.m. to check-in. If you want to get some tasty food from The Hot Box BBQ or Pacific Pie Company food carts on site at Base Camp, bring some extra cash. All runners will receive one complimentary beer with registration, and will be able to purchase more during the event. We will also be selling t-shirts and other merchandise.

As is the case with most places in Portland, parking can be tricky at Base Camp. There is public parking on  nearby streets, and Trimet has some stops nearby. We also encourage carpooling, and always request that you have designated drivers, or a safe ride home.

Further updates will be sent to registered runners as we get closer to the event date.

We look forward to running, drinking, and hanging out with you on October 8th at Base Camp Brewing Co.!