The Only 3 Things You Need to Know about Running. A Conversation with Mark Remy

When it comes to running, writing about running, and laughing at those who run, Mark Remy has perfected the genre. You may know him from his four hilarious books about running, or as the author of Remy’s World (online and in print from Runner’s World), or perhaps from his most recent project, DumbRunner.com, “an online destination for runners who enjoy laughter and pie.” 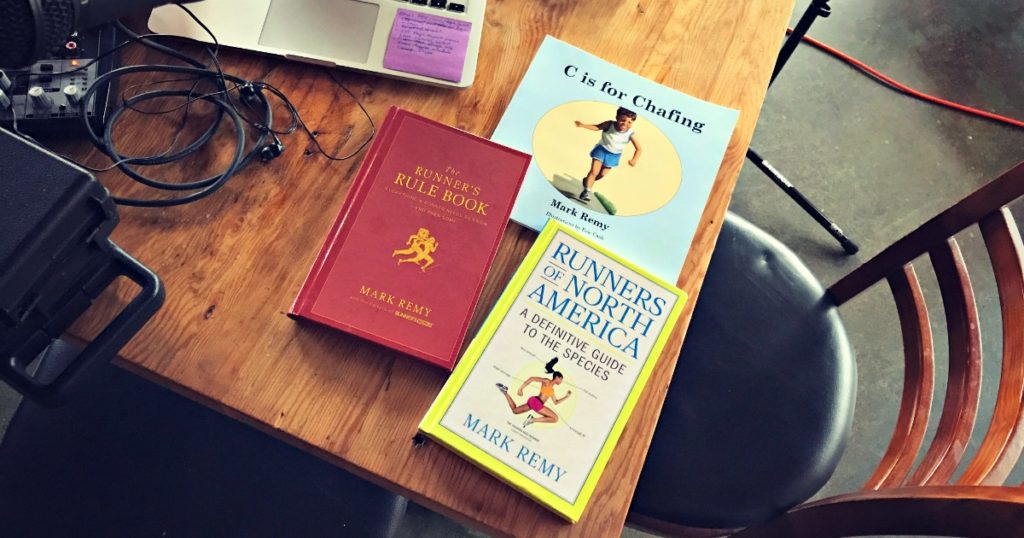 These books will make you laugh.

I’ve had the pleasure to get to know Mark over the past two years on countless runs together. We live near one another in Portland, Oregon, and both run on the Portland Running Company team. If you were to eavesdrop on our conversations while we run, you would discover how wide-ranging they can be – from kids to politics, religion to pie, and whatever else happens to be going on in our lives. I’ve really grown to appreciate Mark’s insight and perspective on most things in life.

With 26 marathons under his belt, and too many 5k’s, 10k’s, and half marathons to remember, Mark is a treasure trove of actual running wisdom. We sat down together recently, and I asked him to share his best three running tips.

Below is a quick recap, as well as the video to our entire conversation. Enjoy!

The Only 3 Things You Need to Know about Running

Mark doesn’t like tips, rather, he likes giving advice. Right off the bat, he tells me that,

“Running isn’t easy, but it’s simple if you’re doing it right. It’s so easy to over think and make running more complicated than it needs to be. Needless complications are one of my pet peeves.”

With that in mind, he shares three important things to remember, regardless of your skill or experience level when it comes to running.

This is geared more towards the person on the couch, or person too intimidated to get out the door. Mark says the best thing runners should do is just get out the door and start running! “It’s not that hard. There’s the door. There are your feet. Just go…if that means the end of the block, that’s a start!”

This is a great reminder, even if you have been running 2 years or 20. There are always things in life that will get in the way of running if we let them.

Running can be easy, but it’s a long process. You don’t need to accomplish everything today, and often, taking a long-term perspective on running is the best way to “become” a better runner.

“Be patient in expecting results,” Mark says. “Too many people get out there and expect instant results. They get frustrated because we’re in such a culture of instant gratification.”

Running will teach you the value of how to be patient. “…if you want to train for a race that’s 4 months away…you gotta be patient.” Take the long view of running and make it a lifestyle.

But he takes it one step further.

“Pay attention to the world…to what’s happening around you (not just threats), but pay attention beautiful things, especially if you’re on a trail run, or just look for it around you… even just the beauty and music around you.”

Because Mark is such a great guy, I made a special discount code just for him! Use coupon code, beermark for $5 off any of our Oregon Brewery Running Series 5k fun runs, anytime!

Now, get going and join us for our next Brewery Run!